IN Conversation With Siddhant Dwivedee


1. Tell me something more about yourself? You do a lot of things, stand-up comedy, creating content and now writing. How has the journey been?
It’s been an unusual journey, to say the least. I studied engineering, got a job in digital marketing & then decided I wanted to be a full time writer. I guess one thing led to another but in retrospect, it has also been quite the journey & I’m glad I took the road less travelled & decided to become a writer. Stand-up comedy is a more of a hobby, really – I like to get on stage and do an open mic or two when I get a chance.

2. The book deals with a very complicated yet interesting topic. What inspired you? From where the kick came?
When I started writing this novel back in college, I was heavily influenced by books like Filth by Irvine Welsh & I wanted to write about something intense – like an unlikely drug addiction or undiagnosed mental disorder. The Mahabharata itself was a huge inspiration too.

3. Being a comedian why you chose such dramatic theme to write. You could have hit the bull’s eye with a light comedy too. Any specific reason?


I’ve been a fan of the Mahabharata since I was a child. When I decide to write a novel, the go-to topic was the Mahabharata. Somewhere along the way I realized that the audience for a purely mythological novel would be very niche so I thought of adding a fictional element and that’s how the protagonist, Raghu was created.


4. Why do you think Mahabharata is the tale to adopt with ease?
The Mahabharata is my Star Trek. As a child, I used to watch the TV show every Sunday & my obsession with the characters and the story grew with time. I find its relevance today remarkable – the grey areas, the moral conflicts and the flawed nature of protagonists in general make for very compelling stories.


5. Many authors use schizophrenia to create a great thriller/mystery sort of story. But they end up doing a blunder. It’s a very delicate topic to talk about. What are your views?
I’d be lying if I said my reasons for including the schizophrenia were different. However, I did end up reading up a lot to make it seem as authentic as possible. It is indeed a delicate topic & I hope I’ve been able to do some justice to it, at least from a storytelling point of view.


6. What kind of books you read and what kind of impact it had on your book? What are your favorite genres, authors and books?
I love fiction novels – pretty much all kinds. I particularly like The Idiot by Fyodor Dostoevsky, the entire Sherlock Holmes series by Sir Arthur Conan Doyle & The Seventh Secret by Irving Wallace.


7. So have you trusted your instincts and old folklore while taking inspiration from the great saga or you have researched beyond the extremities to reach the core?

A little bit of both – I’ve relied on already established storylines and also tried to I introduce new ones. For example, many of us know about Bhishma’s vow from the Mahabharat but there isn’t much literature available on what his life was like prior to that so it creates an avenue for a new story.


8. Thriller and Mystery are accepted with ease in publishing world. How was your experience in this? How you ended up at a place where you and your book are presently?


Rama’s Musings may not be a conventional thriller or whodunit type of mystery novel but there has to be something that makes you flip through the pages and find out more. I tried to focus on creating this intrigue for the reader.

Since the outset, Leadstart had faith in the idea but when the book actually gets publised is a function of several things - editing the manuscript, timing, trends among readers and other aspects that I'm not aware of. Mythological fiction is an extremely popular genre now so I think the timing has been perfect!

9. What’s next in store for the readers?

Sharing their feedback? Haha, I’m working on another novel. Not sure how long it’ll take to finish but it is in the pipeline. I try to tell stories on my Instagram page too! @siddhantdwivs

10. What are your expectations from your readers? They should adore you or they should understand you? Or beyond that they should become a fan?


Above all, I want my readers to be comfortable with however they felt about the book. To expect them to react a certain way would be tantamount to insulting their imagination.

11. Your book has a very interesting cover and title. I was not able to judge it before reading the blurb. Would you like to say something about how they were chosen for your book?

Personally, I think the title should invoke intrigue and should also do justice to the story. The cover also aims to do the same – serve as a clue and a puzzle at the same time.

12. Was there any time while writing when you felt this ain’t gonna work or it will work a big time? Any time you feel utterly motivated or completely dejected.


I was short on attendance in the 6th semester when Rama's Musings got the letter of intent to be published. So when I was sitting in the Principal's cabin during submissions, she told me that I won't be allowed to sit for practical exams and would effectively get 4 KTs. So I told her that I know it's no excuse, but I kinda wrote a novel this semester and I'm only a couple of lectures short of the minimum attendance.

She said, and I couldn't believe my ears, "Am I supposed to ask all students who don't have enough attendance to go write a book?"

I had to clear those practical KTs in the next semester. It's bittersweet now, as I look back with a smile on my face. I can forgive my injuries in the name of wisdom. If you know someone who's got passions that their college doesn't always understand or encourage, tell them to keep at it. It's all worth it later.


13. Why do you think your book will attract readers in these ever changing reading habits of today’s generation?


I guess we’ll find out together!

15. Would you like to pass on a message to your readers before they try your book?

Thank you for your faith! I hope Rama’s Musings expands your mind like no other book did!

Thank You Author for your valuable time.

Raghu is a 25 year old schizophrenic paralegal who has visions of living the life of Devavrata and his visions draw parallels from the events in his real life. As the psychiatric help he receives begins to take effect and the visions are gone, his life seems boring and one dimensional. He's so used to living his double life that he begins to abuse drugs to induce the visions again and his life goes into a downward spiral. What will happen to his love life, his novel and his family? Will he find a way out of the mess or succumb to the chaos? 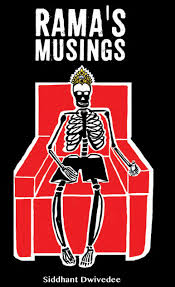 Connect with the author: